I’m at the point in my book reading career (if only!) that all I have to do to find something to read is pickup my Kindle and make a random choice out of the library I have amassed there. Sounds like a good “problem” to have, eh? Sometimes it is a real gamble. I’m on several mailing lists for free Kindle books, as well as several author mailing lists. It can be very difficult to decide what to read.

In May, I chose to reading a cliche named series. One of those “the haunting of…” titles that seem so popular in the paranormal genre. I didn’t know what to expect. It took me a few chapters to even decide if I liked what I was reading. Might have gone differently if I had actually started with the first book in the series. 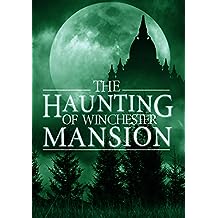 Husband and wife house flipping team, Bailey and Bodhi, have suffered a tremendous loss in their lives. They have thrown themselves into their work to try to distract themselves from that loss. This of course leads to marital problems. They are still in love with each other, but they have grown distant. Book 0 (that’s how Clark has labeled them), starts out as they are between gigs. They find a lucrative deal in the small town of Black Bay in Washington state.

The largest project they have ever taken on, the Winchester house (only called “mansion” on the book covers and title page) has sat vacant for years. The family who built it died in a boating accident – all four members of the family. They had rescued the town from a slow, lingering death of its own. The town seems to worship the family, or at least honor their memory in such a manner that is almost religious. Nothing bad is ever said about them.

The two teenage children of the Winchesters were loved and favored throughout their school careers. The father had invested his wealth in rescuing the town. The mother had even formed a book club that is still attended years after her death. No one in town would be where they are without the beloved Winchesters.

Bodhi contracts the local lumber company to help with the remodel of the house while Bailey starts to learn more about the family and the community. Everything is going great. That is, until Bailey starts having nightmares and sleep walking – again.

What is going on in this sleepy town? Is the Winchester house haunted? Bailey refuses to accept that, at first. Until undeniable evidence – explosive disruptions to their house flipping project, mysterious happenings throughout the house, etc – leads her to believe that the children of the Winchesters are still inside the house.

I don’t want to say too much more about the plot. It was surprisingly gripping. I will say this. Not everyone in Black Bay is as nice as they seem to be, and lost love can lead people to do amazing things – things they would never consider otherwise!

Clark tells a thrilling ghost story, with love and romance, mystery, horror, and a psychological aspect that is very compelling to read. I’d recommend this book to anyone who enjoys a ghost story, a mystery, and even someone who wants to better understand the psychological motivations of a killer. It did take me a bit to get into the story, but as I said, that is because I started with Book 1 instead of Book 0. (Honest moment: I didn’t read Book 0 until I finished Book 2).